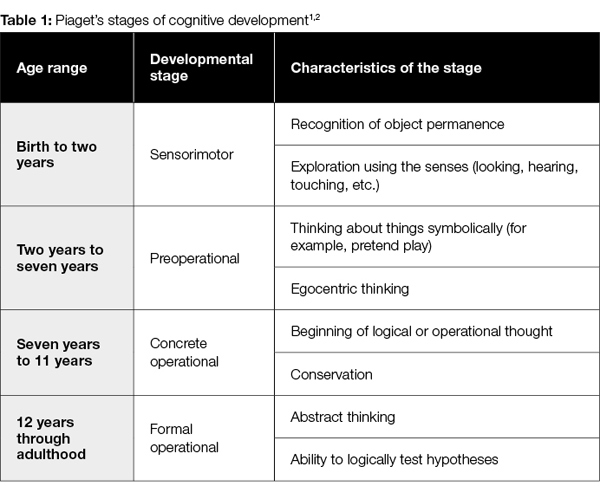 Child development has been studied and researched since 1936 when Jean Piaget became the first psychologist to theorize the stages of cognitive development. Piaget “regarded cognitive development as a process which occurs due to biologic maturation and interaction with the environment.”1,2 His theory can give health-care providers insight into pediatric patients’ development based on age.

It is important for children to develop healthy habits starting at a very early age to promote future health and well-being. This can be accomplished through imitation of healthy habits and introduction to products and routines that promote a healthy lifestyle.3 Using Piaget’s stages of cognitive development (table 1), dental hygienists can recommend products and routines appropriate to pediatric patients’ development.1,2

The first stage of cognitive development is the sensorimotor stage, which typically occurs from birth to two years of age. During this stage of cognitive development, the child explores the world by looking, hearing, touching, and mouthing.2 Children under the age of two love to explore the world by putting things in their mouths, so introducing brushing at this developmental stage can increase the likelihood that they will maintain this healthy habit later on.

Children will repeat behaviors with positive associations.1 It is recommended to begin oral hygiene behaviors by stimulating the child’s gum tissue, even before tooth eruption occurs and as early as four weeks old. Parents or caregivers can introduce brushing in a positive manner by using finger brushes in fun colors and characters, such as the Brushies finger puppets (figure 1).i Each finger-puppet toothbrush comes with a storybook to engage the child and provide tips to parents or caregivers on introducing a brushing routine.